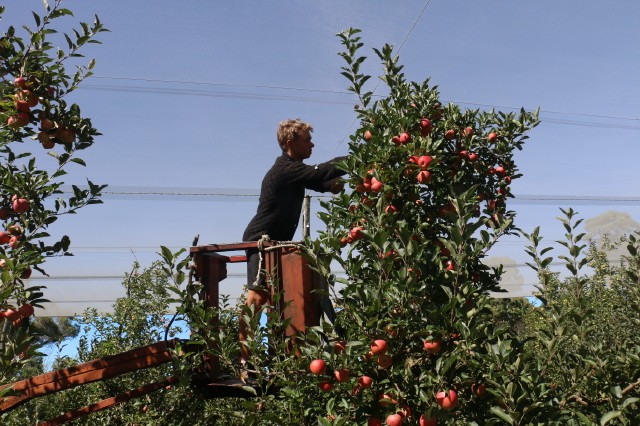 Biting into a juicy, crisp tasty apple is just the best. How often do you get that kind of apple? Not often it seems, when we hear from people eating conventional fruit and vegetables. Usually their comments are “floury and tasteless”. Who wants to be eating that?

One of our organic apple farmers from Stanthorpe, the McMahon Bros, is doing it right. The McMahon’s have been farming since the 1920’s when Clyde and Ellen McMahon purchased the Soldier’s Settlement Block after Clyde returned from World War 1 in 1925. In 1946 Max and Lorna McMahon purchased their farm after returning from the war in the pacific. The third generation of McMahon’s, brothers Mal and Jeff and their wives, took over the farm in the eighties and in the early 2000’s converted the farm to Certified Organic. Jeff’s sons, Paul and David, have been working on the farm since they were young boys. Paul has recently decided to give farming a go, joining his father and uncle on the farm, making the fourth generation of farming ‘McMahon’. Their location, being 1000 metres above sea level and temperatures that drop to -4 degrees in winter, is prime apple growing territory.

Conventional apple farmers tend to harvest, gas and store their fruit for up to 12 months before getting it on the shop shelf. It allows us to be eating apples all year round, but the trade off is fruit that isn’t at its nicest and has chemicals on it! At the McMahon orchard, as organic growers, they must adhere to strict rules and regulations – no chemicals, no nasty pesticides, and they cannot store apples in the same way as conventional growers, such as, using storage gases.

Their apples are picked ripe from the tree (up to 4 times throughout the season!), which allows the sugars to fully develop, providing optimum flavour to the fruit. Conventional growers will often strip their trees in one go, allowing unripe fruit to ripen off the tree.

Eating apples in season really makes a difference to their taste. Trying the array of varieties throughout the season may give you a different outlook on this humble fruit. Apple picking begins in late summer and continues through autumn, as the different varieties ripen. Royal Galas are the first to ripen, followed by Granny Smiths, Golden Delicious, Jonathan, Fuji, Red Delicious and Pink Ladys, with the season finishing around July.

Not only do the McMahon Bros grow organic apples but their location puts them in a unique position of growing crops throughout summer due to the lower temperatures. The McMahon’s grow many other lines during the summer and throughout the year; these include delicious stone fruit, pears, snow peas, lettuce, celery, cucumber, tomatoes, zucchini, persimmons and strawberries. They have also planted pomegranates, lemons and figs that will fruit in the coming years.

With this farming family continuously expanding their produce lines, and not afraid to have a go, you never know what they may try next. Keep a look out for the McMahon name when you next go shopping. Their fruit and vegetables are top notch and will tantalise your tastebuds. You won’t be disappointed!