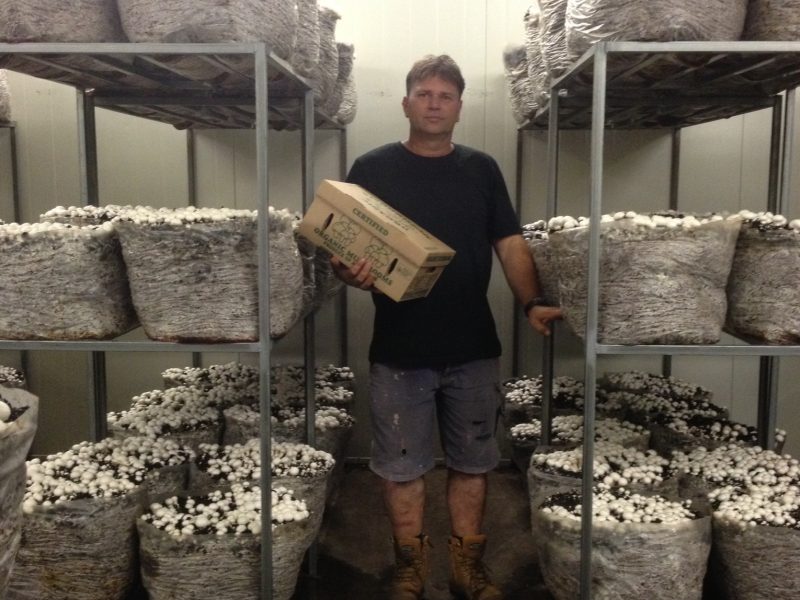 Benalla Mushrooms are our supplier of Certified Organic Mushrooms.

Benalla Mushrooms are an organic mushroom producer based in Benalla, a country region of Victoria. Andrew Cowan and his father Norm started the business over 25 years ago. The farm produces over 100 tonnes of mushrooms each year although being organic makes it more difficult to produce successful harvests. They made the decision to switch to organic after discovering the amount of pesticides that were being used, and wanted to offer the choice of organic mushrooms to the market. Benalla Mushrooms has now been certified organic for over 20 years, and won the Australian Organics Chairman’s Award in 2016. More recently Norm has retired and the business is run by Andrew.

Benalla Mushrooms were the first certified organic commercial mushroom farm in Australia, which meant overcoming problems themselves along the way. As they don’t use chemicals, solving problems in an organic way, such as mould and bugs, must be found or dire consequences could arise. Ensuring the growing climate is perfect all year round is another challenge to overcome. Unlike other mushroom growers Benalla Mushrooms pasteurises their own compost on the farm. “We strive for quality not quantity” Andrew says. Picking slower and not over pinning reduces the yield but helps to make the mushrooms look just as good as conventional to meet their consumers’ needs. Andrew has said growing organic mushrooms is a constant challenge and there is a lot that can go wrong throughout the process, but says “it’s not a job, it’s a way of life”.

Andrew loves promoting certified organic and is only too happy to explain the difference between organic and conventional. Despite the huge commitment that comes with growing mushrooms organically and working 365 days per year for over 25 years (with only two weeks off!), Andrew enjoys his life and couldn’t imagine doing anything else.

Why Choose Certified Organic?
How do you know is a product is certified organic?